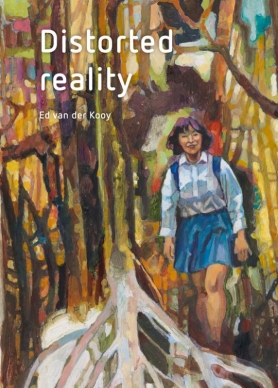 With fifty-three paintings on paper Ed van der Kooy (The Hague, 1956) reflects on the current juncture, at which a volatile pandemic, racial riots and a persistent climate crisis dominate news reports. Sometimes the pictures are dark and intense. Sometimes they just appear to be idyllic, because there is a snake in the grass, disturbing the dream. In a painterly respect, too, nothing seems to be self-evident.

At his request, his daughter Floortje van der Kooy (The Hague, 1993) writes her reflections on several works. For her this will turn into a way to try and understand what is going on in the world and to
overcome the confusion.

This publication shows the fifty-three works and ten poems and also contains the account of a conversation which publicist Kees Verbeek had with them about this unusual project.