Theo Eissens - Linea Recta from A to B 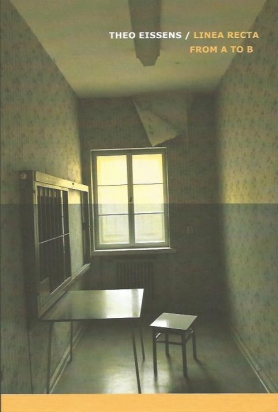 Theo Eissens - Linea Recta from A to B
On 22 March 2015 the exhibition Theo Eissens - Berlin Calling opened at the Livingstone gallery with a series of new works: unique silkscreened images on canvas of abandoned and burdened places in and around Berlin.
Berlin played an important role in the life of Theo Eissens (Amsterdam 1952-2015). The title of this publication refers to the frequent trips he made from Amsterdam to Berlin and vice versa, and the recurrent long and short periods he lived and worked there, starting in 1992.
My first encounter in 2001 with Theo’s work were his extraordinary etchings (sometimes mixed with silkscreen) that he printed in Berlin at the world-renowned Druckwerkstatt Bethanien. This is also where he exhibited with artists like A.R. Penck and Bruce McLean (1996, Galerie im Parlement, Druckwerkstatt Bethanien, Berlin) and was able to immerse himself in German (art)history.
In 2004 his focus shifted from prints on paper to works on canvas and wood panel. His ‘new’ concept involved photography combined with abstract and geometric shapes in acrylic paint. His extensive experience with printing techniques enabled him to use a silkscreen to literally transfer a photograph onto canvas and merge the image with parts painted in acrylic.
This development in his work led to the 2008 catalogue and exhibition Spring Brunnen. Tom Rooduijn writes in the catalogue: ’The exhibition Spring Brunnen reflects Eissens’ view on time and temporality in its most essential way. After experimenting with various shapes and proportions, he found a way to apply all the techniques in his work in a parallel way.’
In this body of work, Amsterdam and Berlin again played leading roles, but the work London Millenium Bridge from 2007 turned out to be the beginning of a new series that would lead to the 2012 catalogue and exhibition London Calling. In this period Theo travelled a lot, expanding his horizons through trips to the Italian Mediterranean and the Gulf of Biscay between France and Spain.
A visit to the German city of Prora on the island Rügen in the Baltic Sea in 2010 with his partner Vera Louise Scheerlink would lead to a series of works that embody his fascination for deserted and burdened places in German history in an unprecedented way: Berlin Calling.
This final series, combined with several major commissions from The Dutch Ministry of Foreign Affairs, IMCD Rotterdam and others, appeared to be the well-earned breakthrough of Theo Eissens work in 2015 and would undoubtedly lead to a comprehensive catalogue. But it was not to be. Shortly after the opening of the exhibition Berlin Calling, Theo passed away completely unexpectedly.
But now it is finished: a comprehensive catalogue representing the last fifteen years of his work. A publication that could only be realised through the superb graphic design of Vera Louise Scheerlink, the expertise of publisher Pascal van Spijk, and the inspiring texts by Mischa Andriessen, Peter Bakker, Peter Gijsberti Hodenpijl, Paul Gisbertz and Javis Lauva. A worthy document for a great artist.
Jeroen Dijkstra - Livingstone gallery

Gies Backes - I Know This PLace